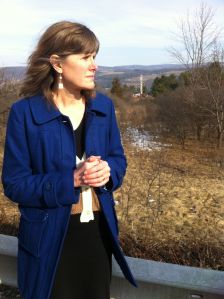 Your Honor, I am not a lawyer. I am a biologist and a human being. I am also a mother of a 14-year-old and an 11-year-old. I bring all these identities to your courtroom tonight.

I am guilty of an act of trespass. On March 18, I willfully stood on private property owned by the Inergy company and blocked access to a compressor station site that is being constructed in order to prepare explosive hydrocarbon gases, propane and butane, for storage in abandoned salt caverns that are located beside and beneath Seneca Lake.

In my field of environmental health, the word trespass has meaning. Toxic trespass refers to involuntary human exposure to a chemical or other pollutant. It is a contamination without consent. It is my belief, as a biologist, that Inergy is guilty of toxic trespass. Inergy has been out of compliance with EPA regulations every quarter for the past three years. In spite of this, Inergy applied for, and has received, from the state of New York a permit to discharge, every day, an additional 44,000 pounds of chloride into Seneca Lake.That’s 22 tons a day. That’s 8000 tons a year. Seneca Lake is a source of drinking water for 100,000 people. Those industrial discharges trespass into the bodies of those who drink it.

Additionally, Inergy’s planned 60-foot flare stack will release hazardous air pollutants, including ozone precursors, as will the fleets of diesel trucks hauling propane. This kind of air pollution is linked to heart attack and stroke risk, preterm birth, and asthma in children. Thus does Inergy trespass into our air and lungs. I see this as a real danger to my 11-year-old son, who has a history of asthma. We live 15 miles to the east—directly downwind—from this facility.

Inergy’s plans to industrialize the lakeshore will bring 24/7 light and noise pollution into a tranquil community. These forms of trespass also have health consequences, including increased risk for breast cancer and elevated blood pressure.

And because Inergy is building out infrastructure for the storage and transportation of greenhouse gases obtained by fracturing shale, Inergy trespasses into our climate and contributes to its ongoing destablization at a time when the best science show us that we need to be rapidly moving away from fossil fuels of all kinds.

Lastly, the risk of catastrophic accidents from the storage of liquefied petroleum gases in salt caverns is real. It has happened in at least 10 previous occasions. The 14-acre sinkhole in Belle Rose, Louisiana, which is now making headlines, was caused by a collapsed salt cavern. It sent crude oil gushing up into surface water and natural gas into groundwater.

As a biologist, I have submitted expert comments and petitions about Inergy’s application for permits to both the New York Department of Environmental Conservation and the Federal Energy Regulatory Commission. However, I am hampered in my efforts to judge the structural soundness of the salt caverns because the company that owns them insists that the scientific research that documents the history of these caverns—at least one of which sits on a fault line—is a trade secret.

Your honor, how can geological history become proprietary information? Without access to data, how can any member of the public evaluate the risks we are being compelled to endure by the repurposing of salt caverns into giant underground cigarette lighters?

In closing, my actions were taken to protest the trespass of Inergy into our air, water, bodies, safety, and security. My small, peaceful act of trespass was intended to prevent a much larger, and possibly violent one.

The people of Bellrose, Lousiana, are now facing relocation after the catastrophic collapse of the salt cavern there. Family homes are being abandoned. And the signs on the front lawns of the empty houses read, “No trespassing.”

To bring attention to such hazards for the Finger Lakes–and for the act of protecting water, which is life itself–I trespassed. It was an act of civil disobedience. For that, and because I have deep respect for the rule of law, which Inergy company does not, I am willing to go to jail.